Posted at 13:27h in Packaging Stuff by Brenda 0 Comments 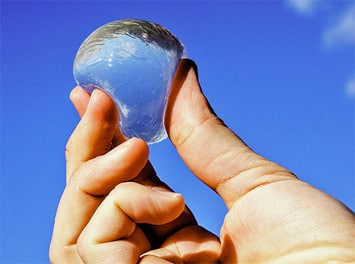 Startups come in all shapes and sizes, but when your business model seeks to replace one of the most simple, ubiquitous products on the planets — in this case, plastic bottles — it really has to be unbelievably brilliant to have any chance at success.

It looks crazy, seems useful, and it’s not particularly difficult to imagine using it yourself. There’s also absolutely zero chance it ever, ever replaces the product that people seem to think it’s trying to replace.

Ooho spheres are created by dipping frozen balls of liquid into an algae mixture that forms a membrane around the ice. The ice melts into liquid water and membrane, which is edible and biodegradable, forms a watertight seal around it.

To consume the liquid you can either bite into the tasteless membrane and sip it out or just eat the entire ball, membrane and all.

It’s this no-plastic-needed concept that has turned Ooho into a bit of a viral sensation. Skipping Rocks is currently fundraising online, having already doubled its target with nearly 1,000 independent investors contributing money to the company.

But there are a few problems with the company’s approach.

Skipping Rocks Lab’s current mission to make Ooho a staple of festivals, marathons, and other outdoor events is a great start, since those are situations in which single serving beverages without waste are well suited, but the wider goal of becoming “the global solution to water and drinks on-the-go” is really an impossible task.

Unlike bottles, single-gulp water is not something most of us need or would even find a way to use on a daily basis.

As demonstrated in videos showcasing Ooho being drunk, the membrane is pretty delicate, and certainly not something you’d toss in a bag or backpack on its own.

And because the membrane is edible, if Skipping Rocks envisions Ooho being sold at grocery stores it will mean selling it within some kind of other external packaging, completely negating its “packaging free” mission.

Ooho is still definitely a cool idea, and could certainly become a staple of large scale outdoor events, and even sports venues, but the second you see someone claiming that tiny edible water balloons are going to replace your bottle, it’s probably a good idea to ignore everything they’re saying.