Posted at 12:04h in Packaging Stuff by Brenda 0 Comments 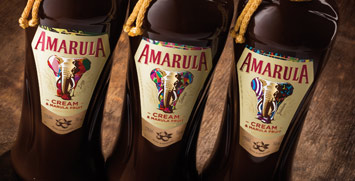 As part of an marketing initiative to boost its African elephant conservation efforts, Distell has launched an innovative Amarula “Name Them, Save Them” campaign – an ambitious effort to give a name to every surviving African elephant in the wild.

In the world of wildlife conservation, a critical situation – in this case, the future of an entire species – dictates that bold and imaginative steps are not only necessary but vital, says the Distell PR about the motivation behind the campaign.

“Name Them, Save Them” got its start last October when Amarula launched the campaign with a webisode shot in Kenya’s Amboseli National Park which directs viewers to a virtual digital Savannah.

This on-line effort allowed an international audience to visit a digital African Savannah where they could design and name a virtual African elephant.

Participants could then share their named elephant with friends and family as a means of raising awareness to the plight of these intelligent and magnificent animals.

The latest wildlife census information puts the number of African elephants living in the wild at around 400,000, a staggering decline from just a decade ago – and this April, Amarula is rolling-out the next phase of its “Name Them, Save Them” campaign.

In Phase Two, the digitalized pachyderms created by the cream liqueur’s on-line audience have been brought to life by putting a named elephant and information regarding the animal on the labels of 400,000 individualised Amarula bottles.

Amarula is the first alcohol brand utilising this Mosaic technology, launching it to the general trade around the world.

Commenting on the popular “Name Them, Save Them” conservation effort, Dino D’Araujo, Amarula global general manager, noted the dire plight of the African elephant.

“The future of the African elephant is at a tipping point. Recent data shows that each day – not each month or even each week – around 96 African elephants are killed by poachers for their ivory. The species simply cannot sustain a slaughter on this scale and survive.

“This fuelled Amarula to intensify its efforts by joining forces with WildlifeDirect, working closely with respected conservationist Dr Paula Kahumbu to save our elephants,” he said.

Amarula intends to maintain the popular digital African Savannah and its fascinating visuals into the foreseeable future and urges conservationists around the world to visit the site https://amarula.com/trust and encourage other animal-lovers to do so as well.

Amarula will donate $1.00 to WildlifeDirect for every digital elephant created on the site.

D’Araujo noted that the African elephant has been the symbol for Amarula Cream Liqueur since its inception and the animal’s current plight demanded a greater conservation effort by the brand to try to save it.

“We have always had a special bond with these magnificent creatures as the marula tree and its fruit contribute enormously to the well-being of the elephant and the very existence of Amarula.

“We had to come up with something that would personalise the plight of the African elephant in a way that would resonate with the international community and rally it to the cause. We think “Name Them, Save Them” is the perfect vehicle for this outreach,” he said.

In a paradoxical twist, it was the senseless killing of another magnificent African animal that served as the inspiration for Amarula’s “Name Them, Save Them” program.

In 2015, an unscrupulous hunter in Zimbabwe killed a male African lion that had been given the name Cecil. When word of Cecil’s death erupted on the internet, the international outcry was spontaneous, immediate and unrelenting.

By having named the lion, wildlife conservationists had created a persona for the animal allowing the general public to identify with it and relate to its well-being. Amarula credits the outcry over the death of Cecil as the inspiration for the “Name Them, Save Them” programme.

The Amarula bottles carrying the name and information on the digitalized elephants will be available from April onwards, in Global Travel Retail as well as South Africa, Germany, Brazil, Canada, the UK and the US.