Kombucha, the ancient fermented tea, is enticing many producers and fans into its immune-boosting and adventurous taste arena. It’s moving from kitchen to craft to mainstream in many markets – and SA, too, is not off this map.

This functional beverage, known to the ancient Chinese as an ‘immortal health elixir’, is produced by fermenting tea and sugar using a ‘symbiotic colony of bacteria and yeast’, also known as SCOBY (the ‘mother’ because of its ability to reproduce).

What results is a refreshing sweet-sour, slightly effervescent beverage that packs a probiotic punch. 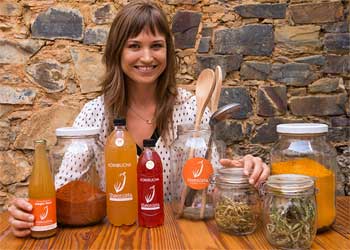 Coming from Seattle where “you could swing a stick and find somebody brewing kombucha”, Werner struggled to find her kombucha fix locally. She then took to brewing her own, using traditional fermentation techniques and high quality, consciously-sourced ingredients.

Initially intended for self-consumption, her Seattle-style ‘booch’ quickly gained attention from friends and acquaintances and soon retailers and restaurants were knocking at her door eager to sell her product.

In the early days, Theonista kombucha was made in Werner’s home kitchen and delivered to stockists by bicycle or on foot.

Today, the company comprises a team of nine people, operating from a manufacturing facility in Woodstock and from there, distributed around Cape Town and the greater South Africa.

Despite business growth, Werner says they have maintained their small production methods, continuing to manually brew and bottle all the products themselves, primarily because that approach has consistently yielded the best results in terms of quality.

Along with organic teas sourced from South Africa, Asia and South America, only 100% pure fruit, root and/or botanical extracts and infusions are used – meaning no artificial flavours, colourants, or preservatives.

“Anytime we add flavour, it’s 100% pure. For example, our ginger flavours are 100% pressed ginger juice and pomegranate is 100% pomegranate with no added sugars or artificial flavours or colours. We love playing with natural flavours and spices and creating new flavours by combing what is available from nature,” she says.

Where did your love for kombucha originate?

I found kombucha in my early 20s while I was trying to find ways to address years of digestive issues despite nearly a decade on a pretty clean plant-based diet, and I found it was a really powerful healing tool for my body.

So for me, the connection to kombucha is very personal. Also, the flavour of kombucha is totally unique and refreshing, and once you acquire a taste for it nothing else really scratches that itch.

Coming from Seattle where kombucha is popular, what made you decide to start a kombucha business in Cape Town and how did you know South Africans would take a liking to it?

When I arrived in Cape Town six years ago, I was excited to find kombucha but dismayed that what was available here didn’t have the same flavour profile I enjoyed, or, most importantly, the health and energetic effects in my body.

At that time I also couldn’t find anyone who I could get a SCOBY from so eventually I gave up and arranged for one to be brought over from the US by a friend. That one tiny starter culture has now created a massive family tree of offspring in our brewery as well as all over South Africa via our homebrew kits.

Initially, I was just brewing kombucha at home for personal consumption and I slowly started getting a few of my more adventurous friends hooked on it too. Very early on the manager at one of my favourite restaurants heard I was making “real” American-style kombucha and asked for a sample; within a week that restaurant placed an order.

From there I started approaching health shops and some of the more hip and/or health-oriented cafes around town during my downtime and orders started taking off organically from there.

What are some of the benefits of drinking kombucha?

There are a lot of factors in kombucha such as organic acids, B-vitamins and probiotics that somehow seem to support the body’s ability to heal itself, starting with the gut. If your gut isn’t happy, other bodily systems just can’t function optimally.

I have yet to find something that has more tangible positive effects on my energy and immune system than kombucha, so it’s hard not to want to share that enthusiasm with others.

How do you come up with your flavours, and what’s your personal favourite?

Experimenting with food and flavour is primarily a creative outlet for me, which is why I think it’s so much fun and can’t seem to hold back. Playing with pure, natural ingredients to create delicious flavours through the quiet, transformative process of fermentation is a way to combine two of my favourite things, nature and food.

As for a favourite flavour, that honestly changes every week but right now it’s a tie between the Turmeric Ginger Cayenne and the Lemongrass Orange Rooibos.

How has the Theonista business grown since its inception?

In the beginning, the whole thing really was just a side project. I was brewing, bottling, delivering, and doing very casual sales in my free time. I hired my first part-time employee after about a year and we were supplying maybe 15-20 shops at that point. Now we have eight full-time staff and supply over 150 stockists nationally…