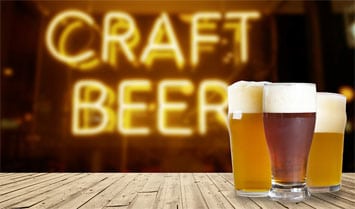 Middle-class consumers who may be trying to drink their woes away are the main growth driver of South Africa’s alcoholic drinks market. And craft beer is quickly becoming their tipple of choice.

The company said craft beer and premium offerings were outperforming other categories of alcohol.

Murray Slater, group operations manager of Beerhouse, which has outlets in Cape Town, Pretoria and Johannesburg, said that when the first outlet opened its doors three years ago there had been great enthusiasm for a bar and restaurant offering a large variety of local and imported beer.

“To be honest we struggled at the beginning to fill the ’25 taps and 99 bottles’ with quality beer. Now, in 2017, we are faced with a completely different problem – there are just too many good local beers to choose from, which suggests a great increase in demand.”

Slater said craft beer differed from the lagers South Africans were accustomed to because it had “a greater complexity of flavours”.

Beerhouse was increasing exposure to craft beers through marketing.

Market leader Anheuser-Busch InBev, which took control of SABMiller last year, reported in its full-year results in March that despite an overall decline in beer volumes in 2016, Castle and Flying Fish – two of its premium brands in South Africa – recorded double-digit growth.

Chalmers said SAB had been involved in craft beer for 15 years and supported smaller players by supplying many of the ingredients used in their brews.

“We also provide technical advice and training in various ways. We support university brewing competitions – and some participants of that programme have become brewers – and we have supported several beer festivals, through direct participation with speciality beers and through infrastructure investment. Craft volumes in South Africa are still small and are starting to surface in premium on-premise ‘craft beers only’ outlets.”

Chalmers said craft played an important role in the beer industry worldwide: “It puts brewers in the spotlight and highlights consumer demand for flavours [and] provenance. It’s an exciting area where all good brewers who care about beer quality can play a role, including ours.

“The craft segment is still growing, although it has slowed in certain markets such as the US. However, we believe it is here to stay and we have been investing in this space,” she said.

Multinational beer companies have spent billions of dollars buying up smaller craft brewers. The craft sector’s 8% compound growth over the past five years – according to market research company Plato – has come at the expense of the big brewers’ mass-production offerings.

Slater said these buyouts were happening at scale in established markets in the US and the UK.

“Large alcohol companies are acquiring established start-up breweries for large sums. In South Africa this has started and you will see an increase with the ABInBev-SAB merger, as it seems to be a business acquisition model that they are now going to follow in South Africa.

“Heineken made the first move, though, and have acquired Stellenbrau in Stellenbosch,” said Slater.

“There is talk of a few more medium-sized established breweries being purchased soon,” said Slater. “This is not necessarily a bad thing as it will bring a variety of beers into the mainstream. It is a clear case of supply and demand, distribution capabilities, and economies of scale and marketing clout that will drive craft into the mainstream.”

Copperlake founder Brendan Watcham said that since 2010 the number of craft brewers in South Africa had grown from five to over 150.

“People are tired of drinking the same style of beer as their forefathers. Like food, variety is now in demand, which is why Copperlake brews six different styles of beer,” said Watcham.

The index provides investors in food and drink manufacturers and mass grocery retailers with a country-comparative assessment of a market’s risks and potential rewards. Each country is scored using a model that includes more than 40 industry, economic and demographic points.

BMI said South Africa’s ranking on the index “reflects the well-developed nature of the formal market, by regional standards, but also its long-term growth potential”.